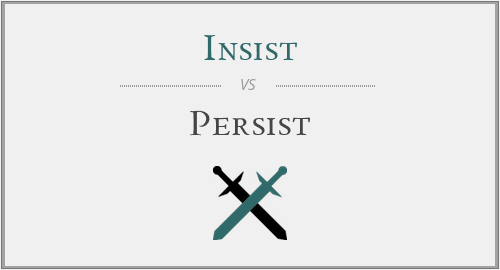 to continue to do or say something in a determined way

‘But why?’ he persisted.

She persisted in her refusal to pay.

Why do you persist in denying that it was your fault?

1. to say very firmly that something must happen or must be done

You must see a doctor immediately – I insist.

She insisted that we stay at her house instead of a hotel.

2. to keep saying very firmly that something is true, even when other people will not believe you

The school insists that it is doing everything it can to cooperate.

He has insisted on his innocence from the beginning.

We said we’d give her the cash, and we must stick to our agreement.

Insistence vs persistence – Just like the verb forms, the nouns are different.

● Her insistence on following up the matter with persistence was the reason behind our victory.